The threat of forfeiture forced Agape Broadcasting into a desperate situation.  With the help of a number of local church groups, a door to door campaign was begun to raise funds.  Enough money was raised to purchase some 20 year old broadcasting equipment and a used transmitter.  Agape leased some upstairs space at 4415 San Jacinto and volunteers worked frantically to repair and install the old equipment.  An ancient transmitter was set up on Chalk Hill.   Agape applied for and received permission to broadcast at 9.6 kilowatts instead of the licensed 100 kilowatts and applied for a broadcast test permit on July 29, 1983.  In a 1985 feature article in the Dallas Times Herald’s Dallas City Magazine, volunteer Joe Norvell described the panic leading up to the first broadcast.  “It was the last week of July and I took my vacation time from driving a bus to help work at the station.  The temperature on the outside was about 105 degrees and inside the house it was about 125.  We worked very, very hard all week, but the equipment wouldn’t work.  It was just junk.  Friday we worked straight through 22 hours, all night.  We finally got on the air that morning.”  At 3:15 am on July 30, 1983, KNON 90.9 FM signed on the air with the words “This is KNON, Dallas.  We have just begun broadcasting.” 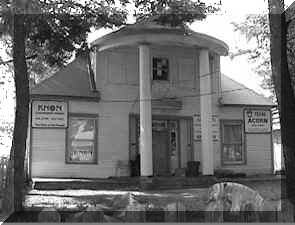 KNON had survived the FCC deadline and was allowed to keep its license.  However the station’s problems were far from over.  Money was an immediate and continuing problem.  In September of 1983, the station qualified for a bank loan of $15,000 that helped KNON stay in business while volunteers were recruited and equipment was being repaired.  That was critical start-up money that allowed KNON to get on its feet.  The antique equipment that had been cobbled together meant that we were only broadcasting at a few hundred watts instead of the licensed 9.6 kilowatts.  The joke was our signal only reached a few blocks from the transmitter.

There were few volunteers so a search began to find reliable people who could do programs.  The small staff consisted of Lou Sartor as station manager, Charlie “Sonny” Rawls as program director, Mac England as volunteer coordinator, and Tom Davis as community outreach director.  The staff spent countless hours doing broadcast slots until a small cadre of on air volunteers could be built up.  The mission statement of KNON was:  To empower the low to moderate income community. 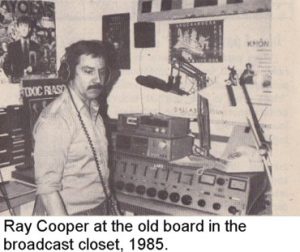 The original broadcast booth was literally in an old closet on the second floor of 4415 San Jacinto. The broadcast board looked like something from a 1950s Russian submarine with huge black bakelite knobs used for volume control and large, loud switches used for pot controls.  You had to lower the volume before flipping a switch, otherwise the “clunk” of the switch would go out on air.  The control room included two old turntables, two cassette decks, and a rotary phone.  The station frequently went off the air for hours or days at a time until various repairs could be made.  The most serious downtime occured in December of 1983 when the station was down for almost 2 weeks as the engineer searched for replacement parts for our obsolete transmitter.

KNON’s first on air pledge drive took place in April of 1984 and was called the Springathon.  In October 1984 Jeff Murray arrived as our new station manager.

In 1985 KNON did its first live broadcast, Little Joe Blue live from the Nairobi Room.  We also held one our first live music events, the first ever KNON Blues Bash at the Nash Street House in Dallas. 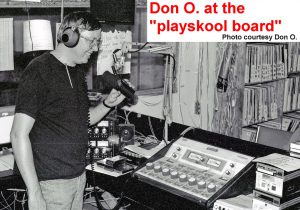 By 1985 the condition of the transmitter had become critical. Parts were almost impossible to find and repairs were becoming more difficult. KNON was still broadcasting far below its licensed power. In May 1985, Agape obtained a new $60,000 bank loan. This money allowed the station to purchase new transmitter equipment, a new broadcast board, and finally increase our broadcast power to the licensed 9.6 kilowatts, still far below our allowed 100 kilowatts. The new broadcast board was much smaller and more modern than the ancient equipment we had been using. Many of the volunteers called it “the Playskool board” because it looked like a toy compared to the massive equipment we had been using. It featured bright blue colors and push button operation. 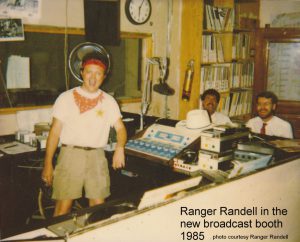 Also in 1985, volunteers began construction on a new broadcast booth in the larger room adjacent to our broadcast closet.  It was completed in late 1985.

1985 was a banner year for the station as our signal finally reached many more people.  This led to recognition by press and listeners alike.  KNON was named best radio station in Dallas by the readers of the Dallas Observer.  Volunteer Phil York’s program, The Texas Toast, was also recognized as the best radio show in Dallas.   Volunteer Nancy “Shaggy” Moore was the subject of a cover feature article in statewide magazine Texas Monthly.  Her life story was optioned as the subject of a possible movie project (which never happened). 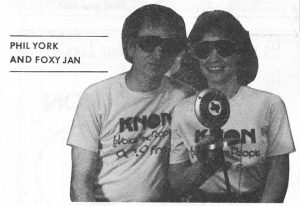 The Dallas Times Herald featured the station in a multi page cover feature in the July 21 edition of their weekly magazine supplement.  KNON issued its first regular newsletter, The KNON Scrapbook, in the fall of 1985. The Scrapbook lasted 4 issues before it was discontinued.