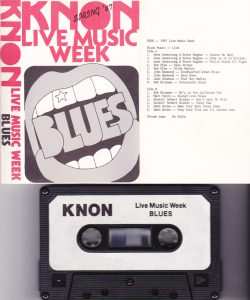 On appeal, the battle between Agape and The Criswell Center was heard by a 3 judge FCC Review Board.  The board looked at all the issues and invited the parties to settle their differences by switching frequencies.  After negotiations in 1987, Agape and The Criswell Center agreed to swap frequencies.  The deal included a one time payment to Agape of $75,000 (in recognition of the higher value of the 100 kilowatt license), money that would be critical in helping KNON continue to broadcast.  It took another year for the switch to actually happen but the decision effectively saved KNON and made the station stronger than ever.   The actual frequency swap took place on May 1, 1988 and KNON has broadcast on 89.3 FM ever since.

In celebration of the agreement, the station held Live Music Week on March 8th-14th, 1987.  Nearly every program included live bands or interviews during the week.  Literally hundreds of local musicians performed live on KNON.  Compilation tapes of the event were created and used as pledge drive premiums.  It was one of the most unique weeks in Dallas radio history.
During the summer of 1988 KNON fielded a softball team called The Ruling Junta.  We played several other radio stations and did fun things like using Bon Jovi records as bases and home plate.